Create your own Ethereum ERC20-Token

In this blog post we will create our own Ethereum ERC20-Token, which could be used for an ITO (Initial Token Offering) and could be traded on the Ethereum Blockchain.

These data sets ("blocks") are linked by cryptographic principles ("chains").

A blockchain is therefore a basically simple, but potentially disruptive way of verifying transactions. A party to such a transaction initiates the process by creating a block. This block is checked and confirmed by the computers distributed in the network. The verified block is then added to the chain, which is stored throughout the network, creating not just a single unique record, but a unique record including a unique history - attempting to forge a single record would mean falsifying the entire chain in potentially millions of cases.

Such a blockchain network is therefore not subject to any central authority - since it is a decentralized and unchangeable general ledger, the information in it (i.e. the respective transactions) is visible to everyone, for example the entire transaction history of a physical or digital good or right.

The cryptocurreny Bitcoin uses this model for payment transactions, but it can also be used in many other ways and is basically potentially suitable for all those applications in which a neutral, timely and audit-proof confirmation of transactions - such as the signing of a contract or the change of ownership of physical or digital goods or rights - is required. 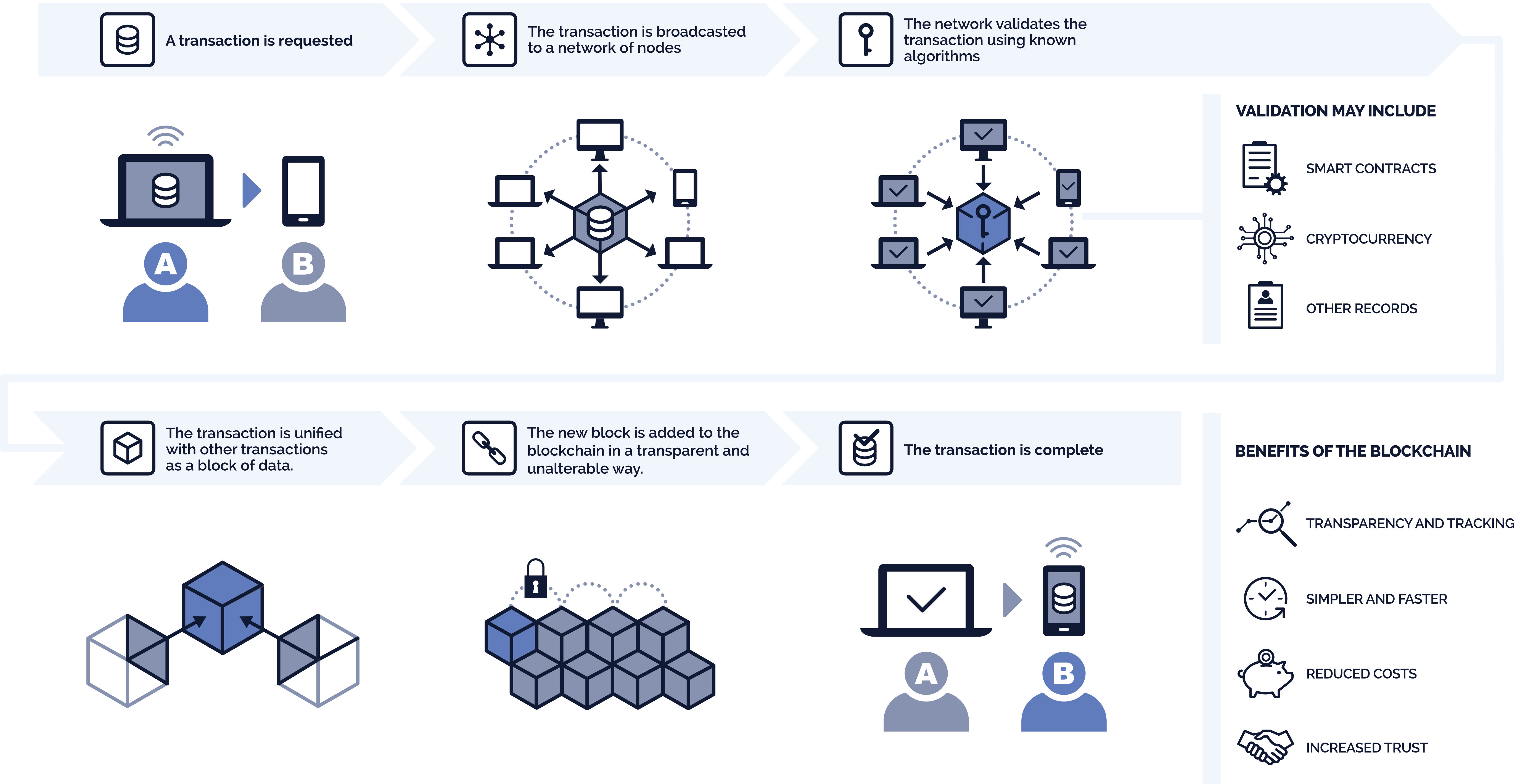 In principle, transactions on such blockchains are free of charge - what usually does incur costs is infrastructure. This is usually covered by the fact that, for example, the initiator of a transaction promises so-called "gas" for those computers in the network that confirm the transaction, as motivation for the operators of those nodes to make their computing power available to the network. On the Ethereum Blockchain this gas is paid in the cryptocurrency ETH (Ether), so the costs in "common" currency (e.g. Euro) depend on the respective exchange rate of ETH. At the time of writing this article, such a transaction confirmation within about 2 minutes on the Ethereum Blockchain costs about € 0.012, a confirmation within about 5 minutes about € 0.0045. The more computers in the network confirm the transaction, the more secure (in the sense that it took place) it can be considered.

In comparison to offline processes - for example a notary who confirms a transaction - this results in the potential to significantly reduce costs and time expenditure for such sensitive transactions on the one hand, while on the other hand aspects of audit security and transparency are increased.

The easiest way to describe Ethereum is as an open software platform based on blockchain technology that allows developers to create and deploy distributed applications.

Like Bitcoin, Ethereum is a distributed public blockchain network. Although there are some significant technical differences between the two, the most important difference is that Bitcoin and Ethereum differ significantly in purpose and capability. Bitcoin offers a specialized application of blockchain technology, a peer-to-peer e-payment system that enables online Bitcoin payments.

So while the Bitcoin blockchain is used to track the ownership of the digital currency (Bitcoins), the Ethereum blockchain focuses on the execution of program codes of any distributed application.

In the Ethereum blockchain, so-called Ether (ETH), a crypto token that drives the network, are earned for providing computing power ("mining"). In addition to its role as a tradable crypto currency, Ether is also used by application developers to pay transaction fees and services in the Ethereum network.

The easiest way to describe Ethereum is as an open software platform based on blockchain technology that allows developers to create and deploy distributed applications.

As described at the beginning of this article, the Ethereum blockchain enables the use of tokens which can be bought, sold and traded by users. These should not be confused with Ether (ETH), which is "only" the natural currency of the Ethereum Blockchain infrastructure as described above.

Tokens are digital assets or programs based on the blockchain. These tokens serve the purpose of attributing a value to them, such as promissory notes, profit participation rights, services or real objects. Hence tokens are generally not to be confused with crypto currencies (for example Bitcoin or Ether). Tokens are basically so-called "Smart Contracts", which in the case of ERC20 are executed on the Ethereum block chain.

Introducing the ERC20 standard, Ethereum first issued technical specifications for a token on its blockchain in 2015, where "ERC" stands for "Ethereum Request for Comments". ERC20 is therefore a standard protocol that defines the properties and functionality of an Ethereum blockchain token.

ERC20 is a standard protocol that defines the properties and functionality of an Ethereum blockchain token.

A token in general is basically simply a digital representation of potentially anything. For example, a token can represent a stock, a bond, an option, or a property etc. A token can also represent access rights to a blockchain or blockchain app, and tokens can also be used to automate "friction points" in various industries.

Utility tokens, are tokens that have a specific "use" on the blockchain or an app based on that. Utility tokens are also called "app coins" because they are explicitly designed for a certain app or blockchain.

For this reason, utility tokens are intended exclusively for such specific use and are not an investment instrument.

Security tokens, on the other hand, represent investments, such as securities such as shares, bonds, funds etc., digitally. Thus, securities of companies, fund houses or real estate funds, which are issued via the blockchain, are referred to as security tokens. As is the case with traditional "securities", security tokens thus represent profit participation, interest income or give voting rights or generate profits for the holders of those tokens.

The creation of your own token is simple - but its emission can be potentially associated with legal implications. We therefore strongly advise against creating a token for fun-only and without prior legal advice.

MetaMask (https://metamask.io/) is a browserextension (Chrome, Firefox, Opera) which makes it possible to run Ethereum dApps directly in the browser and without having to run a full Ethereum-Node.

Remix (http://remix.ethereum.org) is an online-compiler which enables us to deploy our following Smart Contract directly onto the Ethereum-Blockchain.

The following is an exemplary (use at your own risk!) Smart-Contract, which can be adapted as described below in the next step to create your own ERC20 token. (Source: Token Factory and @maxnachamkin)

The following parameters should be adjusted:

The above Smart-Contract-Code can be copied and pasted into the main window of Remix (http://remix.ethereum.org) after the individual adjustments described above.

Attention: In the corresponding dropdown field Select new compiler version a compiler version should be selected which is compatible with the above mentioned Smart-Contract, e.g. 0.4.26+commit.4563c3fc.

In the tab "Run" the Smart-Contract can now be deployed to the Ethereum blockchain. The total number of tokens defined in the Smart-Contract-Code (e.g. 100) should be associated with and held in the MetaMask Wallet (from which they could be traded in the next step).

The following values should be considered in the corresponding fields before deployment:

The screen should hence look as follows: 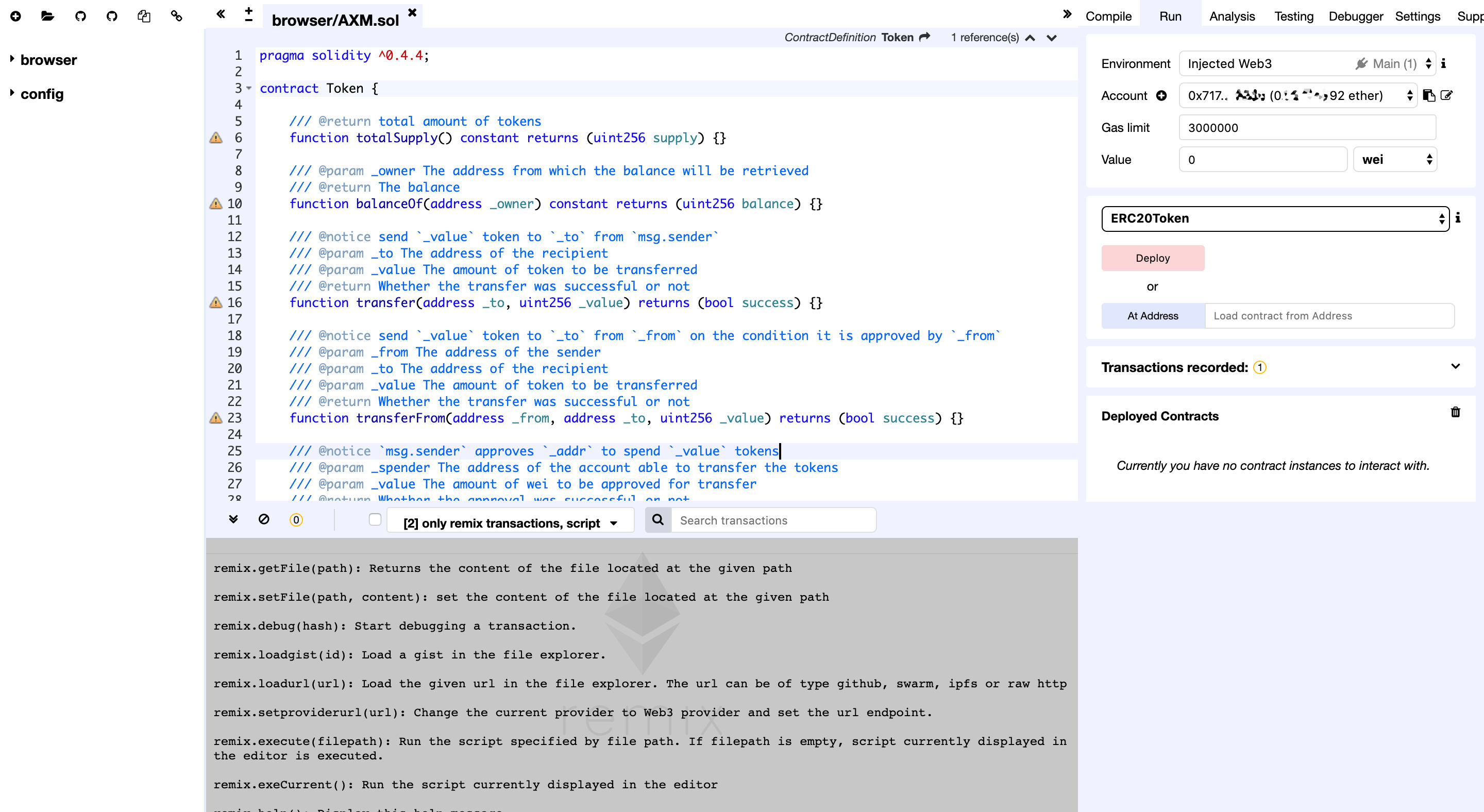 With a click on "Deploy" and subsequent confirmation, the Smart-Contract can be deployed; after the transaction has been confirmed by the Ethereum-Blockchain-Network (note: this can take a couple of minutes), the defined number (e.g. 100) of issued tokens should then appear in the MetaMask Wallet.

Attention: The actual deployment of the Smart-Contract to the Ethereum-Blockchain (and also trading of the tokens) costs so-called "gas" (see above). The specified wallet must therefore be sufficiently covered by ETH in order to pay the corresponding infrastructure fees in the form of gas.

Our emitted tokens should now be found in our MetaMask Wallet, which should look like this (Note: in the screenshot below there are only 99 tokens left, because a token had already been traded when this article was created): 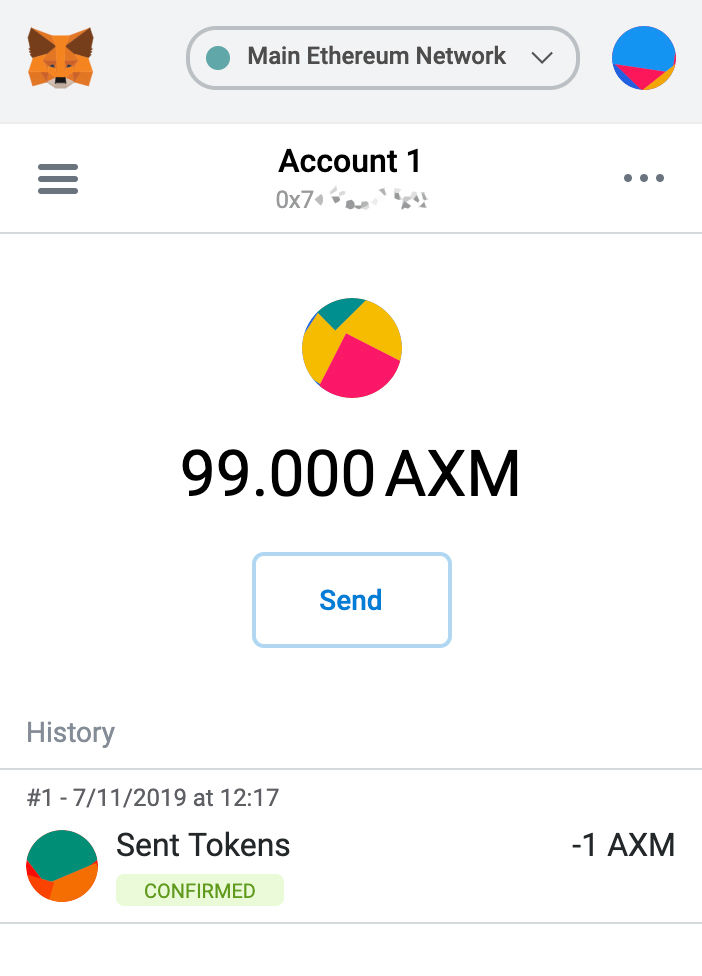 By clicking on "Send", a definable number of the ERC20 token can now be sent to any ETH wallet; the screen for this should then look as follows: 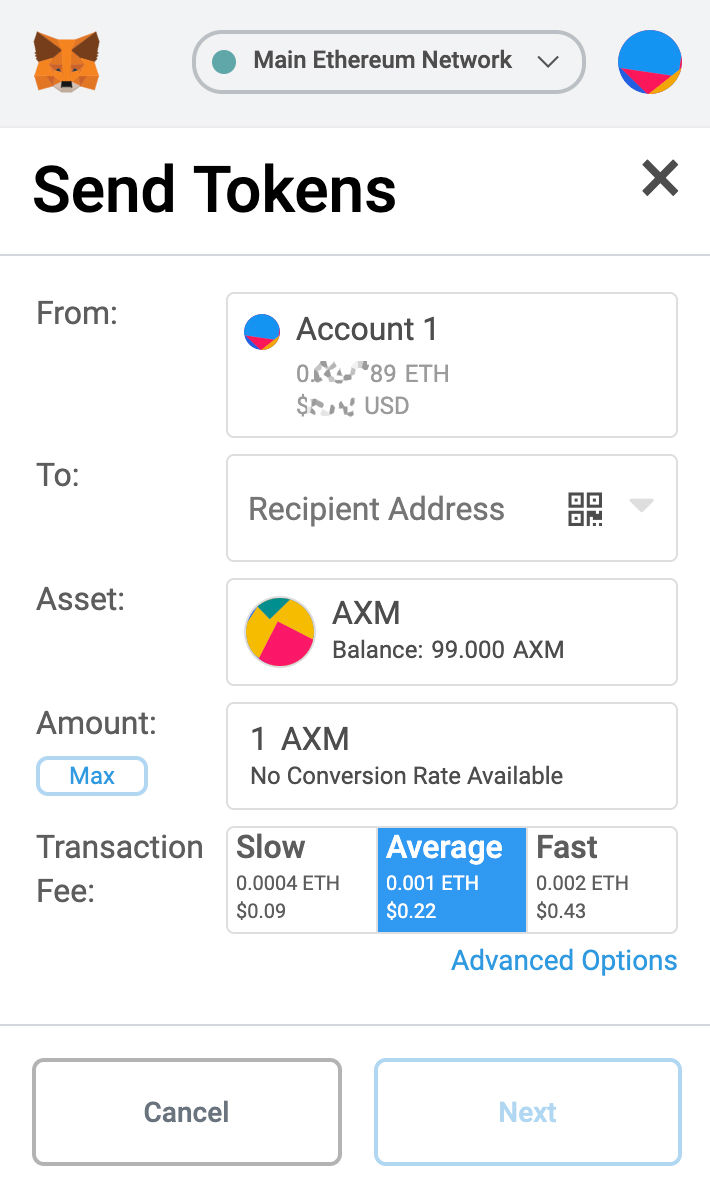 The transactions made by the author in the context of this tutorial can also be viewed: 1. deployment of the Smart-Contract and 2. trade of an AXM Token.